On the sixth of October 2018, Stichting Dialoog NJI convened a symposium under the title “Trauma, recognition and reconciliation after violence of war”. This was organised in collaboration with the Indisch Herinnerings Centrum (IHC) and Psychotrauma Expert Group (ARQ) and with the financial support of the Ministry of Health, Welfare and Sports (VWS).

Since the year 2000, Dialoog NJI has organised yearly Dialogue conferences, firstly initiated by professor Dr. Muraoka, who was professor in Hebrew literature at the University of Leiden. These offered a platform to participants with very different backgrounds, coming from the Netherlands, Japan and to a lesser extent, Indonesia and they also represented different generations. Either as victims, descendants, experts or just people who wanted to know their history. All of them were in a way involved in World War-2 (WW-2) in Asia, and its aftermath. The dialogue conferences offer the opportunity to open up and talk about experiences, memories, but also to listen to each other and to create understanding and sometimes help people to reconcile with the past. Dialoog NJI also works towards building bridges and reconciliation through dialogue conferences in Japan in collaboration with the Dutch embassy. We are now working to organising these conferences in Indonesia.

These conferences were not limited to understanding the past and recognising anger and trauma at a personal level, but strived to look at the future, by learning from the past. As professor Muraoka mentioned, what makes our gatherings unique is that many historic affairs of interest to us concern international relations that are still damaged and require serious attention from the side of all concerned parties.

Many people of the first generation who experienced the terrors of war, either as victim or a perpetrator were never able to speak about it, but we see more and more of them coming out these days because the next generations are asking questions. We also see that significant sensitivities prevail in different generations, which may give raise to anger and aggression.

Very important are social cultural aspects. We see the way in which society deals with war trauma evolving, depending on the social context. And if you look at the three countries, it seems that in the current formal historical discourse, cultural traumas and contextual differences in how trauma’s are interpreted and processed largely differ.

In any case, the question how to pick up the pieces not only as an individual, but also as a society and how to carry on, is still very relevant. Are we capable to step over our own shadow and open up for reconciliation?

This symposium addressed effects of WW 2 at the individual, collective and political level, with the purpose to provide broader insight in the current narratives regarding WW2 and its aftermath in the Netherlands, Japan and Indonesia. What made it different from the conferences is that it offered a platform to academic insights in processing of war trauma and not to dialogue about personal experiences and trauma.

After the welcoming words by Ms. Janneke Roos,

on behalf of the organising organisations and the speech of Mr Floris van Dijk from the ministry of VWS, three filmed case studies were featured. These offered the opportunity to learn the perceptions of persons who experienced the war as victims or perpetrators and about their reception in the three different countries. These moving interviews were with persons who experienced the war directly and today are still amongst us. They were filmed in the three countries.

In the Netherlands we spoke with Ms. Nora Valk, 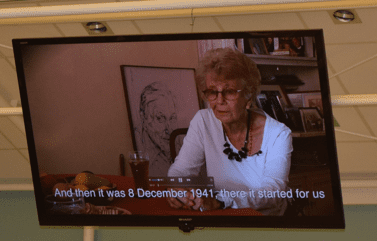 who as a young girl was imprisoned in a Japanese concentration camp in the Dutch East Indies from her 12thto her 15th. She had the opportunity to share her story with a Japanese clergyman in Indonesia, representing the previous enemy and was able to process her trauma.As Nora keeps saying, communicate, talk about it and listen to the other, this is essential to overcome your trauma

In Japan mr. Watanabe was interviewed. He was forced to 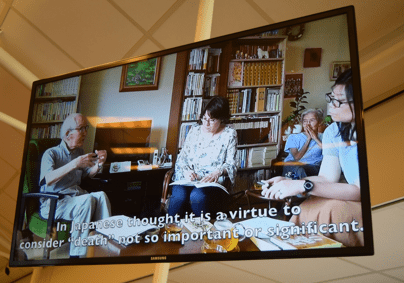 join the emperor’s army although against his Christian faith.
In a sense he sees himself also a war victim. He is conscious of what happened to him and able to communicate about it. Mr. Watanabe also draws a parallel with the present time and emphasized that we need to study the past honestly and openly to learn from it. 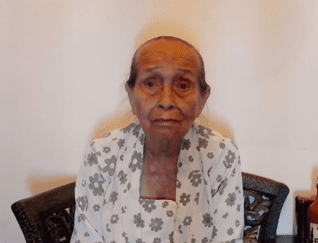 In Indonesia, a 92-year old lady was interviewed Ibu Kustiati always kept silent over her experiences in the war and after, and became rather emotional in the interview. It was clear that she had kept her traumas deep inside and that she had not yet processed them.

These personal experiences of first generation victims/perpetrator were very useful in better understanding of different stages of trauma processing and the importance of personal and societal recognition towards reconciliation. In their speeches, speakers of the day referred to the filmed interviews. The films also provided useful input in the afternoon discussions.

Furthermore, the morning programme presented research and theories concerning the concepts of war trauma, trauma processing and reconciliation at different abstraction levels. Also the relation between these concepts and levels were highlighted. 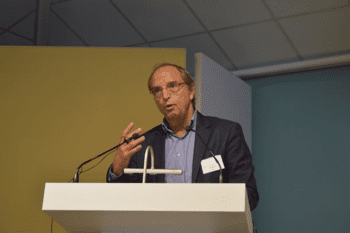 The first presentation in the morning was by Professor Dr. Henk Schulte Nordholt, head of research at KITLV and professor of Indonesian History at Leiden University. He is
also secretary of the European Association of Southeast Asian Studies.He addressed violence in the context of 1942-1949 and provided an overview of how people in Java have experienced the 1940s, starting with the Japanese occupation in 1942 and ending with the tragedy of the great famine, which took the lives of about one million Indonesian people in 1945.

What followed was a brief but very chaotic period in Dutch historiography labeled as ’bersiap’ in 1945-’46, which consisted of a series of local outbursts of violence against everything colonial.

He then concentrated on the final year of the Indonesian Revolution after the second Dutch military intervention, till August 1949, during which most victims were made. Finally he briefly discussed the silences in the process of commemorating victims of this violent decade in Indonesia, Japan and the Netherlands.

Dr. Nordholt’s speech provided a very useful, broad historic framework for the situation in Indonesia during and after the war with, as many participants observed, lots of new information. It also contributed to better understanding why the resistance to the Dutch was so well organized, as the Japanese had already trained youth cadres during the war. Also the great suffering of the Indonesian population was well captured.

As stated in the programme, the next speaker was Dr. Terry Smyth, with “Captive Fathers, Captive Children”. Unfortunately, for personal reasons, Terry Smyth was not able to attend and he sent his utmost regrets. Luckily we found ms. Mariella Kwee prepared to read his speech. Mariella studied Japanese language and culture at Leiden University. 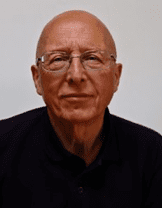 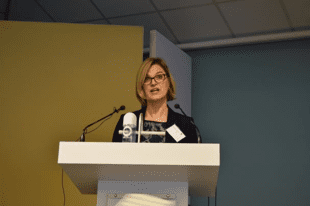 Terry’s research looked into how trauma’s of prisoners of war were transmitted to their children and he also shares his personal thoughts about routes to reconciliation, in which he argues that reconciliation is a multi-layered change process that requires a conducive set of conditions to flourish.

In WW-2, Terry’s father was a prisoner of war (POW) in Java and Japan. Many years after his death in 1995, Terry discovered his father had spent three years as a POW in Hiroshima 6B camp, approximately 130 kilometers from Fukuoka. Assisted by Japanese friends, he and his wife travelled to Japan in 2010 to visit the site of his father’s camp, and to foster reconciliation.

In 2013, he began a full time PhD at the University of Essex from which he graduated in 2017. Currently he is a Community Fellow in the Department of History at Essex, which enables him to continue his scholarly activity and writing.

The research findings of Dr. Smyth stroke a chord by many in the audience, as appeared from the discussion groups. These helped participants in the discussions to move beyond their personal experiences of concentration camps and stressed the impact family violence had had on their lives. New was the obliged silence as ideologically inspired by the British government as was also the case in Japan.

Our next speaker was Professor Rolf Kleber.

Prof. Kleber has conducted and supervised various research projects on psychotherapy, outcome of posttraumatic stress disorder, work related trauma and intervention programs, late sequels of war stress, psychosocial consequences of disasters, health issues of refugees, and cross-cultural aspects of mental health.He has been teaching courses on clinical psychology, traumatic stress, as well as culture and health at Utrecht University. He is a consultant and advisor in mental health care after major life events and emergencies in The Netherlands and abroad.
Prof. Kleber has published scientific and professional articles and books on stress, coping with trauma and cross-cultural psychology.

He addressed Struggling between resilience and disorder:.. psychological consequences of war related trauma.

Professor Kleber’s presentation was informative, but the details of the medical aspects and definitions of trauma appeared to be of less interest to part of the audience than a more concrete discussion of the specific trauma’s of Indo-Europeans.

The last speaker of the morning was Dr. Eri Nakamura. 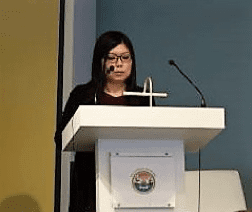 Miss Nakamura is a research fellow at the Japan Society for the Promotion of Science affiliated with Keio University. Her main fields of research include Japanese modern history, social history of war and medicine, masculinity and militarism in modern Japan. She completed her Ph.D. at Hitotsubashi University in 2015 with a dissertation on treatment of the Japanese soldiers categorized as war neurosis in the Imperial Japanese Army during the Asia-Pacific War (1931-45).

She was the author of a Japanese monograph, War and Trauma: Invisible War Neurosis within the Imperial Japanese Army (Tokyo: Yoshikawa Kōbunkan 2018), which examines how Japanese soldiers afflicted with psychological injuries were treated during the Asia-Pacific War and why postwar Japanese society has lacked collective memory of them.

She spoke about medical/social/individual recognition of war neuroses during the Asia-Pacific war. Title of her presentation is “Broken Soldiers in the Emperors Army”.

Dr. Nakamura’s talk attracted much interest and received much praise, as it opened up a view on the men who served in the Japanese military, an issue many had not been familiar with. It also complemented the filmed interview with the Japanese soldier – Mr. Watanabe earlier in the program.

The discussion group included contributions from participants of a range of backgrounds and ages. Through these discussions and the subsequent panel discussion, we aimed to generate conclusions and recommendations for further research and for policy makers. Important to note is that the group sessions were not meant as dialogue to create understanding of personal experiences but rather as a discussion that gave opportunity for clarifications, issues regarding research and issues regarding policy-making.

Although the clear instructions for the group discussions were interpreted differently, sometimes not leading to concrete topics for the panel, from the evaluation it appeared that this session was rated well, albeit some felt that it needed more time. There were lively discussions and there was room for personal experiences and for more academic inputs. This doesn’t always go together.

However, the panel discussion did not yield the results we expected. Apparently there was insufficient time for the panel moderator to prioritize the topics coming from the discussion groups; subsequently the potential of the panel members was under-utilized. It should also be noted that the audience and panel were tired after an intensive day, although the atmosphere remained positive up to the end. In the future this component of the program has to be more carefully considered and prepared.

The following link leads you to a compilation of the group discussions.