Cooperation of the Dialog NJI with Amstelveense schools project

Dialog NJI is working with the Amstelveen schools project ‘meet- and (Re) thinking “that falls under the auspices of the Foundation for Victims and Fallen of the Dutch East Indies, which organizes the annual commemoration Indies in Indie Monument in Amstelveen. See: Indie commemorate Amstelveen
The aim of this school project in its pilot period (2013 t / m 2016) was to develop in the area of new especially dialogic teaching methods:

Also, Yukari Tangena of Dialog NJI provides a guest lecture at the World Express Lesbos where she told what the relationship is with Japan and the background of the Fukuoka monument in Nagasaki.

On the anniversary of August 14, 2015 she was present at the commemoration, where they will have a flower arrangement on the commemoration of 2016 explaining what had initially objected to a number of former camp victims.
The schools in the years 2013 t / m in 2016 yielded the following dialogic activities:

By A. W. Schram are cared for some guest lessons in groups 6 and 7 of primary education (Bussum). Currently, a lesson in preparation and will again be provided a number of lessons in the academic year 16-17 (Bussum, Alkmaar). Will also be catered for in one class of secondary education teaching will be (Katwijk). These lessons will be given on the basis of the story of a prisoner who has been in a camp in Japan and it was forced to operate receivers for the Japanese military industry. 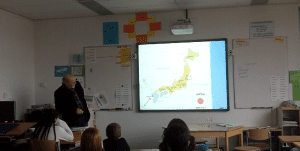 The lessons of the lesson (once completed) will also be offered via websites to other schools and to organizations offering courses in WWII.